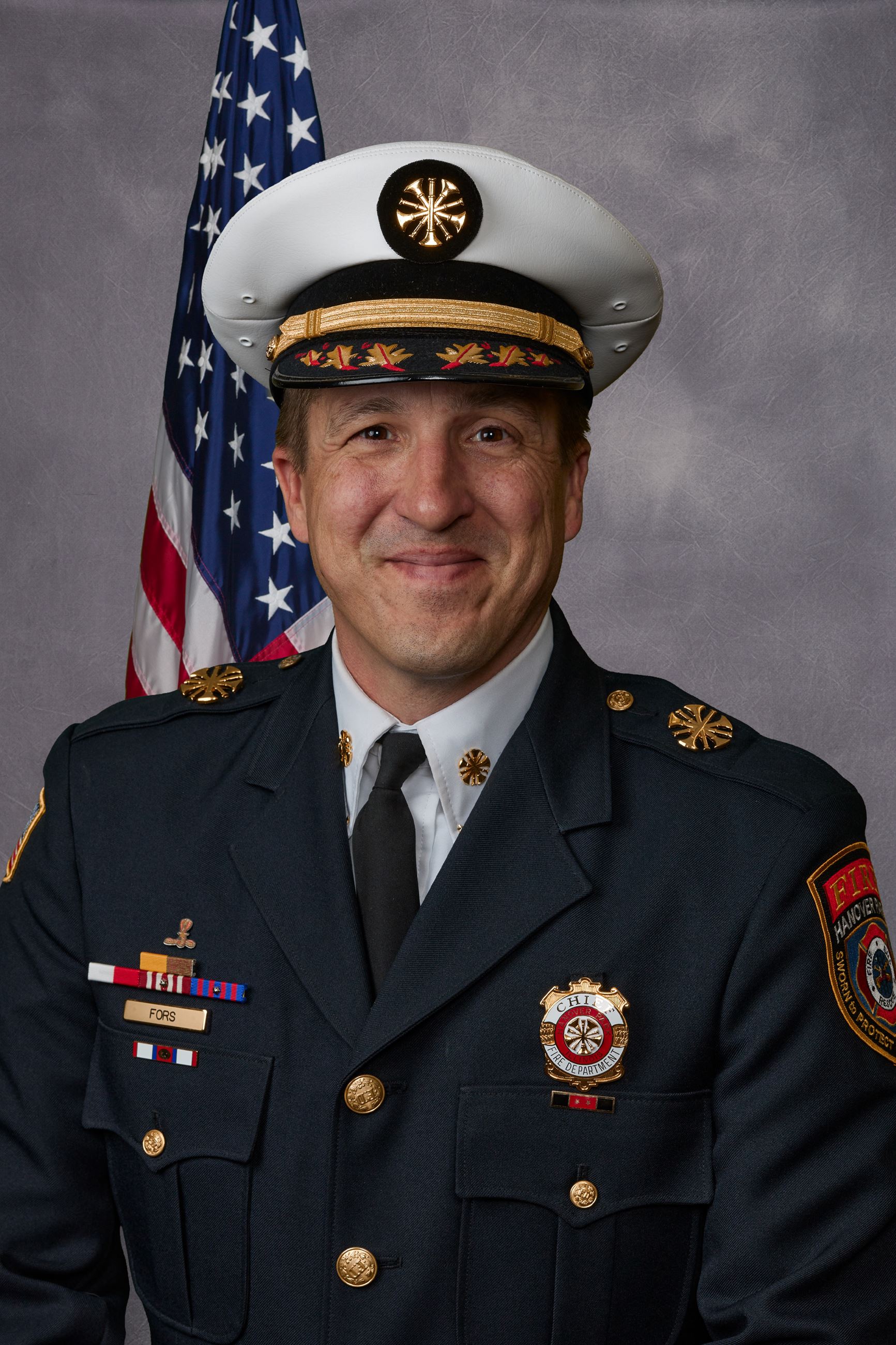 Fire Chief Eric Fors began his career with the Hanover Park Fire Department as a Part-time Firefighter in October 1997. He was appointed as a full-time firefighter/paramedic in April 2001. Chief Fors was promoted to Lieutenant in July of 2008, Battalion Chief in October 2011, and to Assistant Chief in 2016. He is now being promoted to the rank of Fire Chief/Director of Emergency Management.

Chief Fors has received numerous departmental commendations and letters including:

Chief Fors was appointed as a member of the 2016 IL House of Representatives Mobile Integrated Healthcare Taskforce which was tasked with creating legislation on how this program would be administered by the State of Illinois through the Illinois Department of Public Health.

The goal of the Fire Department is to provide efficient and high-quality service in the areas of Inspections, Prevention, Fire Suppression, Emergency Medical Services (EMS) (including emergency and non-emergency ambulance transport), Hazardous Materials response and mitigation, as well as Vehicle and Technical Rescue Services and Emergency Management Planning and Preparedness.

The department responds from two stations utilizing a complement of 35 full-time and 13 part-time firefighters and officers. These personnel are supplemented by a full-time Administrative Assistant, a volunteer Fire Chaplain and 15 Fire Corps volunteers. Responses surpass 3,300 emergency calls annually with approximately 70% of these being EMS in nature. Services are provided using a staffed paramedic equipped Rescue/Engine (Squad), a staffed Paramedic Equipped Engine Company, two Mobile Intensive Care Ambulances, one of which is a jump company to a Tower Ladder and a Battalion Commander, along with a myriad of other ancillary response equipment. The department also operates a peak time staffing system that incorporates a “Power Shift” (staffing either the tower ladder or an additional ambulance) to assist with call volume as well as Inspectional Services duties.

All personnel are trained at a minimum to the level of Basic Operations Firefighter, as recognized by the Illinois State Fire Marshal's Office and the International Fire Accreditation Council, as well as Illinois EMT-Basic. All full-time personnel are required to possess an Illinois Paramedic license. The department actively participates and responds as part of MABAS Division XII and staffs Haz Mat Squad 15 with technicians to serve as the rapid response squad to all departments throughout the division. The squad/trailer combination provides “Level A” Haz Mat equipment as well as specialized monitors and decontamination systems.

The EMS Division has responsibility for management of the department’s Fire Corps program. Fire Corps is a component of the Village’s Citizen Corps Council and functions as an operational team within the Fire Department. Fire Corps members are volunteers tasked with the responsibility of providing on-scene emergency rehab for firefighters. The team serves Hanover Park Fire Department and is an active part of the MABAS response system. Additionally, Fire Corps assists with public fire and life safety education, community events, fire ground/emergency incident support and emergency management activities.