On Palm Sunday 1928, a fire at the house of William H. Meyer showcased the need for an area fire department. An organizational meeting to form the Ontarioville Volunteer Fire Department was held April 3, 1928. $282 had been collected from the community and nearby farmers to aid in its establishment. Art Schlueter, the department’s first Fire Chief, was given authorization to spend $125 to purchase a 60-gallon two-wheeled soda acid cart from the Maywood Fire Department. This cart, designated as No. 1, responded to calls for help as fast as firemen could pull it.

The department purchased its first motorized apparatus in 1930. The unit was equipped with a water tank and a portable gas powered pump and was funded completely through department fund raising activities. Still having no dedicated firehouse, the equipment was stored at a local warehouse.

In 1933, it was determined each family would be assessed $2 to fund the small department. Using this assessment, the department was able to purchase a third apparatus in 1942. Throughout the 1940s the area experienced heavy growth and demand for service continued to climb. Additional apparatus, as well as implementation of a fire department based ambulance service, were added.

Equipment was housed and meetings were conducted at Schlueters Garage on Lake Street, making it the first official fire station. In 1951, annual dues were raised from $2 to $5 to purchase insurance coverage for both equipment and personnel. A monthly bulletin, which reported news about the fire department and the residents of the community, was established. By the end of 1952 total paid up subscriptions increased to 83, up from the previous high of 54 in 1951.

Establishment of the Fire Protection District

Cost of services continued to increase. In 1957, the subscription program was abandoned and the department formed a governmental taxing body known as the Ontarioville Fire Protection District. Under this system, the district was able to levy taxes against property owners of the area to establish and maintain a fire department.

The Ontarioville Volunteer Firemen’s Association was formed specifically to help raise funds above and beyond what the tax levy generated. This Association had 27 members who worked as volunteer firemen. Frank DeVusser was the Fire Chief. Volunteer firefighters included: 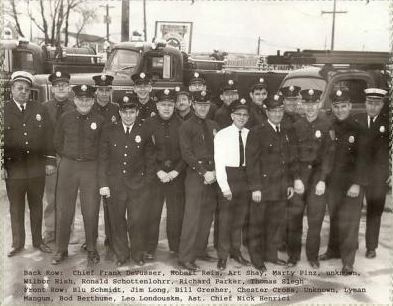